Posted by n i l e e y on September 30, 2006
* Part 1 was supposed to be posted while in Glasgow, but not sure what happened. It's now been posted and you can read it here.

Edinburgh
We were blessed with good weather in Edinburgh, where we spent the first half of the day on our own there. After a lot of not-so-exciting sights, Edinburgh was surprisingly a city filled with an interesting history and beautiful architecture. Many famous people were born in Edinburgh. Among them are Alexander Graham Bell (inventor of the telephone) and Sir Arthur Conan Doyle (author and creator of Sherlock Holmes). 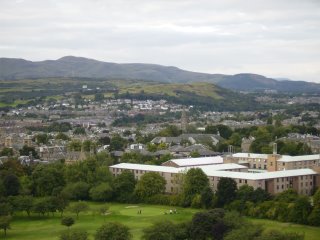 We visited the Queen's holiday home; the National Art Gallery and basically walked around the town. We wanted to visit Edinburgh Castle because it wasn't covered in the itenary, but it was just too time-consuming, so we gave that a miss.

Photos of Queen Mary's bath house (left) and the Queen's holiday home (right). The Queen wasn't around that day to invite us for tea. 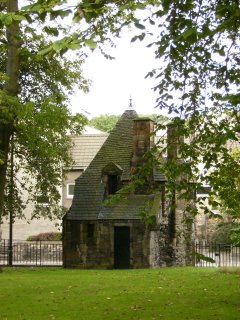 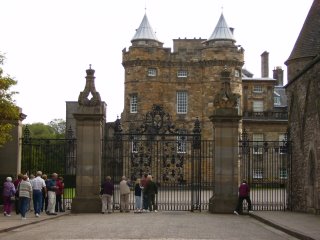 Food : We needed to grab a quick bite so it's Subway sandwiches (again!). Dinner was on our own in Glasgow. We opted for some nearby Chinese/Thai cruisine and their food was yummy!


Belfast
We took off to Belfast via a huge express ferry that looked like a luxury liner. The bottom decks are for the vehicles. The top deck for passengers is complete with cafe, bar, TV, children's playground, casino and even a souvenir shop! The ferry trip was around 90 minutes.

Ever since the IRA declared the ceasefire, Belfast is slowing finding its pace and identity. There are developments taking place, but the sense of loyalty to either the Irish or British are still present. This took place in form of flags. The one pictured below pledged their loyalty to Ireland, while any who pledge their loyalty to the British will wave the Union Jack flag. 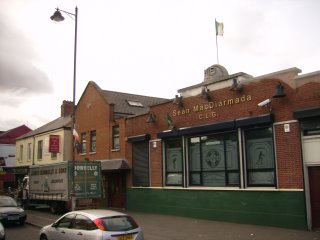 Food : Since Belfast was just a photo and lunch stop, we needed another quick bite. No prizes guessing what we had for lunch. If you really do not have a clue, check out Edinburgh.

Dublin
Dublin, in contrast to Belfast, was a very vibrant city. It felt a bit like London, albeit the slower pace. And the constant Irish music being played in the souvenir shops made me wanna don a green leprechaun hat and do the Irish jig.

It is home to the famous playwright Oscar Wilde. There is even a statue of him in a park near the house where he was born. It's very unusual to have a statue built to commemorate a playwright (I don't remember seeing one for Shakespeare). Maybe that's why he looked so smug! 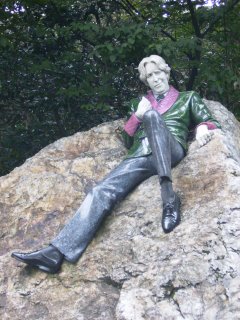 We spent 1 1/2 days in Dublin. However, the weather wasn't very kind to us as it rained quite heavily during certain hours of the day. Traffic was also more congested than usual due to the Ryder Cup taking place during that time.

The main road - O'Connell Street - was reopened quite recently after a period of renovation. So to commemorate this they had displayed a series of rabbit sculptures by an artist called Barry Flanagan along that road. My favourite is pictured on the top. There was also this giant needle sticking out in the middle of O'Connell Street (pictured below). It's called The Spire of Dublin, and is nothing more than a piece of art to add to the aesthetic appeal to the city. At least the KL Tower served some purpose. 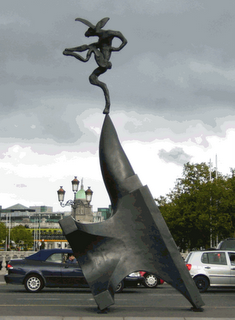 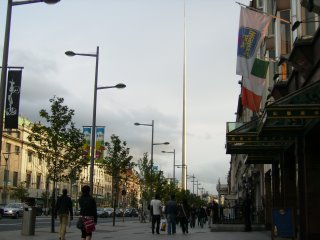 Food : Another place to be seen and heard during the evening is an area called Temple Bar. That's where we had our first ever pub food dinner, and it tasted great! The best part of all was that the prices were very reasonable, considering we were in a tourist spot. The photo below is the bar next to where we had our dinner. It stood out among other buildings because of the colourful flags. Both bars had tradional Irish music performances during dinner. 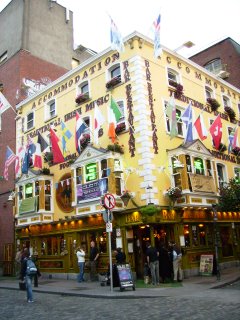 Waterford
On our way to Waterford, we passed by a small town called Kilkenney for lunch. Nothing really special about this town. We did see some really wierd vegetables in the organic market. No photos though.

Waterford is supposedly famous for its reknowned Waterford Crystal, which doesn't interest me at all. Apart from that, there's nothing much to visit in Waterford. We stayed at this old, creaky hotel called Bridge Hotel. Luckily I didn't stayed up for their entertainment that night because I was down with fever, or else I couldn't sleep as they were telling stories about the ghosts in the hotel. Not sure how true it is, but I had a feel that that hotel was haunted (or maybe it was just paranoia). No photos of Waterford either.


Cardiff
We took off in a three hour ferry ride from Ireland to Wales. Thank goodness the ferry had live telecast of the Ryder Cup, or else my dad would be so bored. I slept through most of the journey, trying to recover from my sickness.

The only stop we did in Wales was Cardiff. Cardiff was just another city, and there's really nothing very special about it, except that they had a huge stadium right smack in the city, and the Cardiff Castle, which we opted to visit.

The interior of the castle is unique, thanks to the 2nd Marquess of Bute, who transformed the castle to a beautiful masterpiece. Each room is unique in design, and very elaborately decorated. The designs represented his passion in all things medevial, languages, God and nature. We were not allowed to take photographs inside the castle, but more can be found in their official website.

What I found fascinating was that the walls were adorned with all different types of creatures. The stone panther on the left is actually part of the wall surrounding the castle. 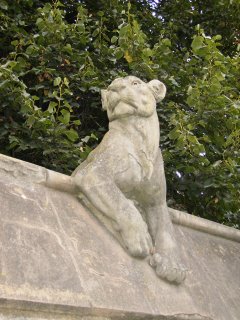 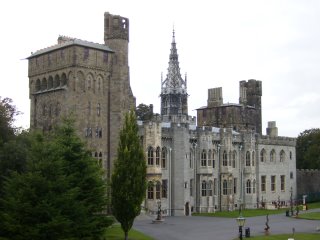 Food : Lunch was just some muffins while on the ferry. We had dinner at the hotel. Thankfully there was chicken in the menu, as I was getting sick of beef, ham and bacon!

To be continued......
Travel Tales