The Best of London

Posted by n i l e e y on October 19, 2006
* Took a while to get this blog posted due to quarter close, and subsequent events that took place in office *

Decided to cover some of my personal highlights of London...

The Natural History Museum
Keyword - DINOSAURS. Although I'm not so crazy over dinosaurs compared to my interest in early civilisation, seeing fossils of dinosaurs and extinct animals rekindled the days I was very engrossed to become an archeologist. It was when growing up I realised i will never get to be one :-(

The architecture of the building is very interesting. If you look very closely, it has animal carvings and sculptures incorporated very discreetly. Actually it's meant to represent Darwin's discoveries on evolution. Entrance is FREE :-)

Saw fossils and bones of dinosaurs, and wondered what would it be like if dinosaurs or giant mammoths still rule the earth. Saw a stuffed dodo (poor creature), a bustard (a bird with a funny name), a giant pliosaur fossil (a sea creature), the anotomy of a tortoise, a preserved Coelacantch (a fish named 'living fossil' as it was once thought extinct, but found to be thriving somewhere else), a giant sloth, ugly deep sea fishes (so ugly no one would wanna eat them) and a huge tree trunk, among others. Those that have coloured fonts, the photos are attached below. 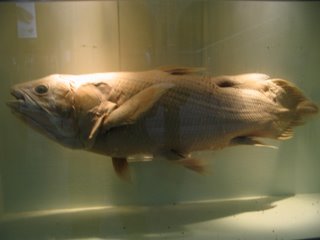 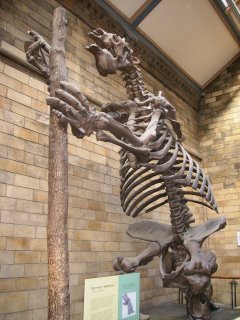 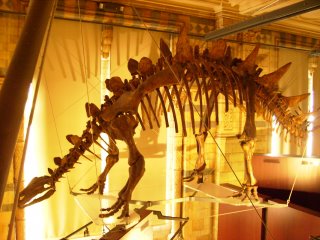 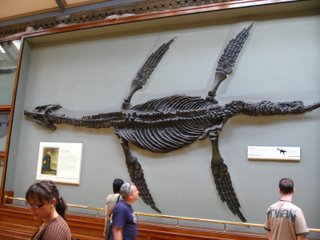 We only had about one hour or so to browse through the museum as we need to rush to have roast duck at Four Seasons for dinner. I only caught a glimpse of the giant blue whale. I read somewhere there is a 8-feet preserved squid on display, but I could not locate it. It was an eye-opener and refreshing experience. (why can't our museums be like that???)

The British Museum
The British Museum has to be my favourite London attraction, and the best part of it was it's free! Entering the building itself, one is already so awestruck with the architecture. Such a huge spacious white entrance, with a high glass roof. When we were visiting it was raining, so there wasn't much sunlight, so I can imagine how bright the place will be if it's bathed in natural light.

The British Museam is so exciting to me coz there are so many artifect that I've read of, but never get to see the real thing......till now. There's nothing more I love than Egyptian archeology and Greek Mythology, although i'm equally excited with recent Aztec discoveries.

My first artifact was the Moai from Easter Island. The Moai is more famously known as the large stone heads synonymous with Easter Island itself. More, including photos, can be found here. It then struck me how tall the monument was.

Next we headed to one of the most popular sections - Egypt. There stood their most famous attraction - The Rosetta Stone. We've studied about the Rosetta Stone during history classes in high school. The stone contains inscriptions in three languages : Hieroglyphic ; Demotic Egyption and Greek. The Egyptian and Hieroglyphic texts were successfully translated by Champollion, a significant milestone in both architecture and linguistic perspective. Below is a photo taken of the Rosetta Stone. Mind you I had to wait for a very long time before I can get in front to look at the inscriptions, and then take a photo of it. 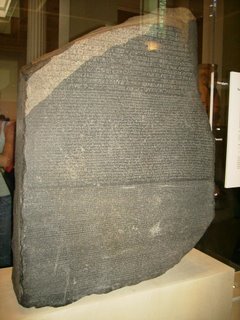 There were so many more Egyptian aftifacts, and while they can't even compare to the collection in the Egypt Museum, the sight of it made me even longed to fulfill my ambition to be an archeologist :-(

What surprised me more was their collection on the Assyrian empire. I'm not very exposed to their history and background, and reading about it during history lessons. I was greatly impressed with the artifacts displayed, and how well they have been preserved and restored. You are talking about gigantic stone slabes with carvings a few thousand years ago.

Pictures of a winged human-headed bull from an ancient palace; a stone panel depicting the King and a mythical creature; and a series of stone panels depicting the Assyrian king indulging in lion hunts. Note how brutal the killings were. 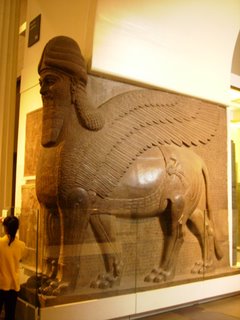 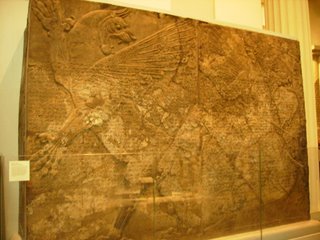 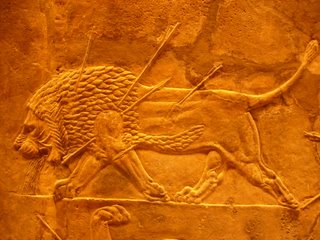 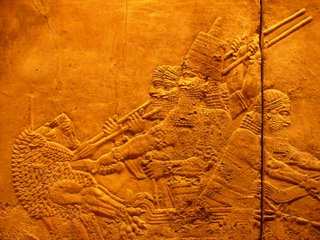 Next section would be Greece, where they have quite a huge (albeit very fragmented) collection of the Parthenon, the temple of Athena. Athena is generally known in Greek mythology as the daughter of Zeus, and the goddess of war. There was a long history how fragments from the Parthenon have ended up in The British Museum, and they even have hand-outs justifying why it should remain in there and not back to Greece. I guess it's the same reason why they do not want to return the Rosetta Stone to the Egyptians: they will lose the main tourist attractions. 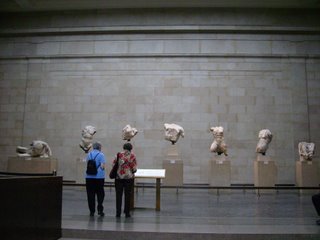 Anyway, back to the Parthenon. The display is very spacious, mostly due to the fact there's nothing much to display anyway (the main building and pillars are still in Greece). Some picturs above and below. Note that 99% of the sculptures are headless. Apparently, the heads are all in Athens, which I find it really funny. 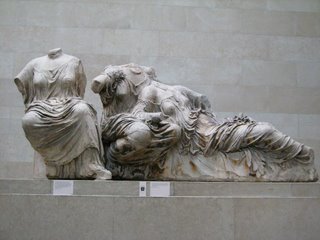 Then I figured, if this is a temple dedicated to Athena, there has to be a sculpture of her. So I went searching......and I found her....or rather her breast specifically....and her head is in Athens. So much for being a goddess. 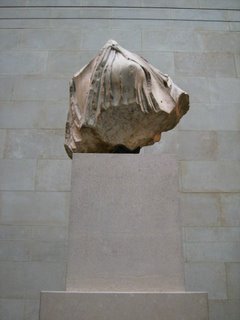 It was a pity we could only spend that much time in The British Museum. Apart from some Roman and early Christinity artifects, there's not much time left as we need to start making our way to Her Majesty's Theatre to catch The Phantom of the Opera. So I basically missed out on the Latin American collection, which i believe will have some Aztec treasures too. Oh well, like my dad said, "you can't have everything if time is a factor." :-(

The Phantom of the Opera
It's Phantom's 20th anniversary and they are still performing!!! No pictures here due to the theatre restrictions. However you can catch someone trying to sneak a shot everytime the attendants walked away.

After watching the movie, and listening to the OST till I can memorise the lyrics from "PrimmaDonna" (just kidding), it is a must to watch the original musical itself. Ototo-san has already pre-booked the tickets, but we were sitting on the balcony, so the view can be very distorted. I like the actor playing the Phantom role. His voice is powerful enough. Christine and Raul are ok too, EXCEPT for the part when they sang "All I ask of You". It sounded too rushed and no chemistry at all. Christine sounded like she was force to declare her love to Raul. But again, thankfully there's the Phantom to save the day.

Ben & Jerry's Ice Cream
Ok, while this is an American company, it's pretty big in UK too. Bought a three-scope ice cream to share with my family, and it's absolutely the yummiest ice-cream I have tasted, probably coz the flavours are so wierd!! 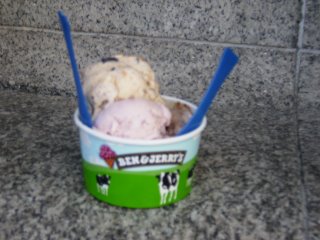