Posted by n i l e e y on November 26, 2006
Last weekend, I followed Oka-san to the Tmn Tun Pasar Malam to buy some fruits.

We were there relatively early - about 3 pm - where we came across this fish stall opposite Peek-a-Boo hair salon. What struck me about this stall was that not only they have a huge variety of fish and other seafood, they stock up one of the largest fish (in terms of size) I've ever seen in a wet market, or supermarket, for that matter. 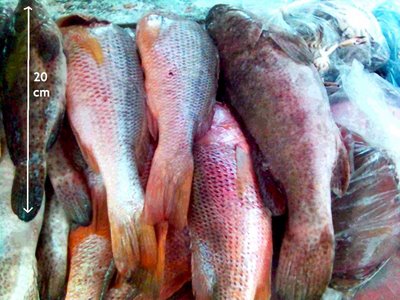 These are garoupas. The smallest on the left is about 20cm long, so can imagine the rest. On the right are actually stingrays wrapped in plastic bags. 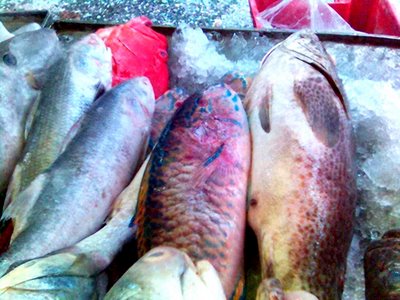 A rare find - The huge red garoupa sandwiched in between the other fishes. Mum got a much smaller one for dinner that night. There's also this fish with blue stripes on its face and body (2nd fish from right), not sure what is it, but someone bought two of those. 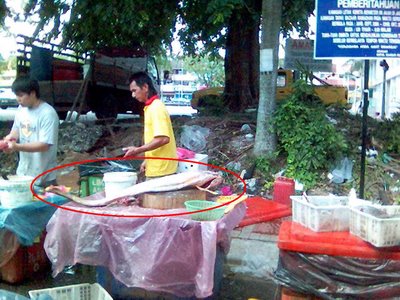 Check out the size of that fish! According to the stallowner, that huge fish is called 'Ka Ma Yao' which translates to 'Fake Kurau'. Kurau also got fake one??

Although it was only 3 pm, many people were already there. We bought three fishes and some prawns that day, and the price was reasonable. Oka-san had a headache trying to change her dinner menu as all those fish needs to be steamed within the next couple of days to enjoy the freshness.

Looks like Oka-san has another new place to buy fish. In fact she just came back from the Pasar Malam and got herself some Bawal Putih!