Goodbye to my old PC games

Posted by n i l e e y on December 27, 2006
Been doing another round of spring cleaning (I'm perpetually doing spring cleaning coz I accumulate so much trash!!) when I found these three discs in my CD compartment.... 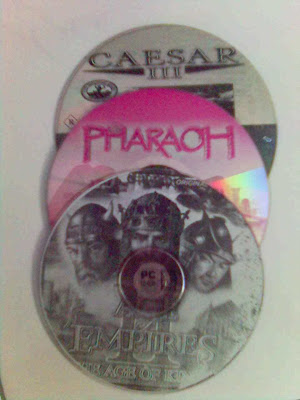 I started playing Age of Empires II during Uni days, got influenced by my guy friends. We love playing cheats and Photonman, just for fun. I am no where near their talent coz they are so into building up their army, while I like to decorate my town :-(

Hence, I was very happy when Caesar III came about, coz this was the game I was looking for - no need to accumulate army, just gather resourcs, ensure your people are happy, appease the Gods, and just get promoted everytime you achieve the required ratings.

It's no easy task, and I never managed to complete the last level, but it was a lot of fun building the Roman Empire.

Pharoah was the Egyption version of Caesar III (both are by Sierra Games). While I enjoyed the beautiful graphics, it was rather tedious playing this game, coz it takes forever to build a pyramid!!!! Also, I also got kinda bored when the layout is always swamps and desert. I can't be perpetually building huge monuments and harvesting reeds to make papyrus!!!

Eventually, these games became 'obsolete' due to Windows XP as they ran on W2K platform. So I guess it's time to trash out the old, and hope for the new.

I am already playing AOE III, now just waiting for the chance to get hold of Caesar IV, which will most likely be next year.

Finding Hippo said…
Pharaoh (not Pharoah, sorry I'm a total spelling bee whore) and the Caesar (and Zeus) series of city building games are, sadly, my most distinct memories of university life. A pity that Impression Games, the developers for the series (Sierra Entertainment are the publishers) were ultimately sold due to financial reasons to Vivendi, and subsequently shut down.

However, the good news is that the ex-developers formed Tilted Mill Entertainment, and their most recent games are Children of the Nile (a city-building sim based on, surprise, ancient Egypt), and Caesar IV (published by Sierra again ;-).

Now that I've poisoned you, may you have many more sleepless nights trying to appease the gods while constantly trying to upgrade your city dwellings (cue evil laughter).
10:16 PM, January 03, 2007

n i l e e y said…
Gee, i didn't realised i misspelled Pharaoh!! Amon-Ra's proably gonna zap me or give me ten thousand years of famine...thanks for highlighting that!
7:38 AM, January 04, 2007