It was a Sunday afternoon.

She lounged around in the living room floor, trying to finish off the 1000-pieces jigsaw puzzle she had for the past two months.

Almost there, she thought as she look at a dozen more of the jigsaw pieces lying around her. She had this jigsaw many years back, but only decided to work on it two months ago, to keep her mind occupied after THE break-up.

"To the left, to the left, everything you own in the box to your left..."

"Irreplaceable" by Beyonce was on air on MTV. She looked up to the TV screen in front of her, paying heed to the lyrics.

Could Beyonce be ever so wrong, she thought miserably. After four years of courtship, you would think the person you love is irreplaceable. But no, he had to shatter the trust that they built for so many years, and that was also because she decided to return home one day to find another girl in his arms. Even you loved him so much, this is something unforgiven. But doesn't mean he is irreplaceable.

Then again, it could be even worse if you haven't found out. He would have continued his promiscuous ways while you are floating about in Cloud Nine.

"So since I'm not your everything, how about I'll be nothing, nothing at all to you. Baby I won't shed a tear for you. I won't lose a wink of sleep, cause the truth of the matter is replacing you is so easy."

Ah, if only Beyonce was right. If it is really that easy. How many sleepless nights she endured, how many rounds of tears and sorrow, drowned in glasses of Long Island Tea and Absolut. I could be your nothing, but look who is the one who's hurting.

It was after one month when she decided to take action and lead a whole new life. She shifted to a new apartment, got a haircut, took up a new job, and attempted to work on the jigsaw puzzle. Although all these changes were both drastic and hectic, she didn't mind, for they took her mind off the break-up.

Back to the puzzle. 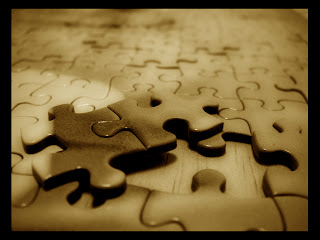 Before long, she truimphantly held the last piece on her right hand, placed it into the puzzle, only to find that......the final piece is missing!!!

She panicked. To her, this puzzle meant a lot fo her, for it represented a symbol of a new life. Or rather that's what she told herself when she started out this project. She's piecing back her life, and once it's complete, means she's ready.

But now, she can't finish it.

What does it mean?

Her life is still not complete?

Where is the missing piece?

She searched frantically around her apartment, checking out every nook and cranny, but no puzzle in sight. She even searched the balcony area, as that's where she put the jigsaw puzzle when she first shifted in, but to no avail.

Dejected, she dragged herself to the balcony. As she was ready to scream and shout out loud (heck with the neighbours!), she looked below, and spotted........the missing piece! It was at the edge of the balcony of the neighbour's house beneath her.

How did it ended up there? She wondered. It doesn't matter now. She needed to get it quick, before it dissappeared for good.

She rushed downstairs and rang the doorbell. A young gentleman opened the door. Their eyes met, and suddenly she felt very concious of herself. She was still dressed in a black tank top and shorts, and her hair was tied up in a messy bun. She thought to herself, I must have looked like a fool right now!!!

Realising that he's still looking at her, she mumbled,"Sorry, I'm from upstairs. I was trying to finish my jigsaw puzzle when I realised the final piece is missing. And I saw it at your balcony. So......was wondering if I could trouble you to retrieve it for me? That piece meant a lot to me."

He broke into a warm smile, and went into his house. A few minutes later, he came out again, the missing piece on his right palm. She took the jigsaw from him, feeling still so awkard.

"Thank...thank you very much" she mumbled again before preparing to dash upstairs, to end that embarrasing encounter.

"Wait" He said. She turned around.

"I guess you must be new to the neighbourhood. I haven't seen you before. My name is Richard. Welcome to our community"

They shook hands. His hand felt so warm and steady. His smile was so charming and sweet. His eyes...

"Hi Katrina, nice to meet you"

She broke off the stare, still feeling so embarrassed.

"Hey, wait. You mentioned this is your last piece of jigsaw puzzle right? Shouldn't it be a time of celebration? If you don't mind, I can bring you to this nearby bistro. They have the best pasta around town."

Is that a date? She was startled. She looked at the jigsaw on her palm. It was meant to signify her complete transition to a new life, a new beginning.

And is this her new beginning? She pondered for a while.

Then, clutching the last piece of jigsaw, she smiled and said to him "I'd love too. This missing piece is worth a celebration. We'll meet at the lobby at 7 pm."

She skipped back home, and put the final piece of jigsaw where it belonged. The jigsaw puzzle is complete, she smiled to herself. A new beginning beckons.

While searching her waldrobe for something to wear, she suddenly realised she was singing the song she heard and reflected on earlier.

Perhaps Beyonce was right after all.

I wrote it myself. Had the storyline for a very long time, but just didn't managed to put it out in words.

Javatia said…
hey babe! is this the story you started for that marathon writing competition last year?
1:17 AM, January 29, 2007

n i l e e y said…
hi jam, no that was some political fiction - and i'm someone who is clueless with the political scene!! So probably figures why i can't finish it in the first place.