Posted by n i l e e y on January 16, 2007
I have to admit that I'm no spelling bee, and sometimes my grammer can be quite pathetic. However, here's just some lighthearted comments based on my observation in recent years.

Combine these two - together with some spelling errors - and you'll probably get a laugh at the below. If you do not have a sense of humour, or do not know what the heck am I rambling about, I suggest you give this posting a miss.

A word, if misspelled, can give a totally different meaning to the reader. I've came across many (including my own errors) and will put some of those that I can remember here :

Data flown in (should have been Data flowed in) - I will always remember this. The error was highlighted to me by my manager when I first joined the company. I copied her in one of my emails, and next thing I knew, she came and highlighted the error to me.

I couldn't figure out why I put "Flown" instead of "Flowed". The first word that came across my mind then was actually "Flew", which is even worse, come to think about it. I don't wanna imagine data flying all over the place, but neither was my intention to have the data physically flown over from Australia to KL!

You are my great Menthol (my guess is it should have meant Mentor) - Found this phrase while wrapping apples for the club last year. Someone wrote this on the thank you card, and I just found it funny. Not sure was it Raymond or Raymond's brother who saw this card and remarked "He/she forgotten to mention which brand of ciggie they are referring to"
My collegue LL once told me she came across this email, whereby the writer wanted to say "Tortured" but ended up typing "Torched" instead. Immediately a burning torch came to mind. I guess the writer's intention was something else, but LL kept thinking of the poor torch being directed at the fellow's face.

Recently I read in the newspapers that China is trying to fix its spelling boo-boos and translation errors. What caught my attention is this : fancy a bowl of Fried Rice with Crap?? I think I rather have Fried Rice with Crab anytime.
Perhaps the most classic moment I've encountered was during Uni days at Taylor's college. It was during one Accounting tutorial when my lecturer asked us to list down on the white board what materials are required to build a house. My teammate went out and wrote "Simen" - which is actually the Bahasa word for Cement. Then she looked at the board again, and changed the spelling of word to "Semen". I was speechless and dare not laugh. I think my lecturer commented something like he didn't know semen can be used as a building material, and he doubt its ability to stick. It was then she realised she's made the boo-boo but the whole class was already laughing.

I'll end this post with the below photo. This is a box of peanut biscuits that was bought by my collegue from Hong Kong. What is PIGNUT??? 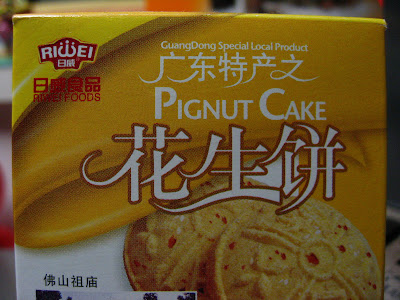