You wanna see something really scary?

Posted by n i l e e y on January 18, 2007
You're travelling through another dimension. A dimension, not only of sight and sound, but of mind. A journey into a wondrous land whose boundaries are that of imagination. Next stop, the Twilight Zone!
*Twilight Zone theme song - Play it if you dare!!*

Decisions, decisions.
Last night I was torn between watching American Idol and Dragonball. Then I switched to HBO and discovered they were showing The Twilight Zone : The Movie.
If only decision making was so easy. 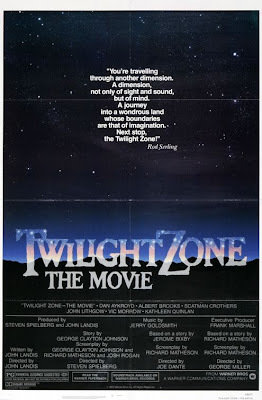 I can't remember when exactly I watched this movie on TV, but it has to be more than 12 years ago, when I was still staying in SS2.
This movie comprises four short stories by four directors (one of them Steven Spielberg) which are their own versions of classic stories from Rod Serling's landmark television series. Although I had never watch the series before, but seems this series was a cult favourite as each episodes plays with the imagination of the viewer. It's something like X-Files and Amazing Stories.
Of the four short segments, I only remembered the last segment - which is also the spookiers - titled "Nightmare at 20,000 Feet". John Lithgow was excellent as the fearful man who spots a monster tearing apart the side of the plane he was boarding on an extremely turbulent night. It was that segment that lead me to many sleepless nights and a fear of flying more than a decade ago.
After so many years, I still remember that last story, and after watching it again last night, I thought the monster wasn't so scary after all, but the story itself is still so spooky.
And I didn't realised it was Dan Aykroyd (of Ghostbusters fame) who quipped this sentence at the beginning and the end of this movie : "You wanna see something really scary?"
Yeah, the special effects suck (what do you expect in a movie made in 1983??). But it's the story-telling process that is the main draw of this movie.
And that theme song too. Totally spooky.
Entertainment Zone Memory Lane