Chinese New Year with a difference

Posted by n i l e e y on February 21, 2007
Chinese New Year celebrations in Johor at my grandmother's place is still traditional, in the sense that we do not eat out, but a lot of time and effort is spent on preparing the dishes.

In the past I never really helped out, as everytime there will be enough relatives in the kitchen perfoming various tasks. This year, however, was different. I had decided to be an active participant in the kitchen.

Below are just some photos taken 'backstage' to show how much work is done in order to prepare a scrumptious dinner for 26 people (Clearly not an easy feat!!!)

Roast Duck - A CNY staple. 3rd uncle and 2nd aunty had the "honourable" task of chopping up the roast duck for dinner. While 3rd uncle seems to be coping just fine, 2nd aunty struggled but still managed to cope in the end. 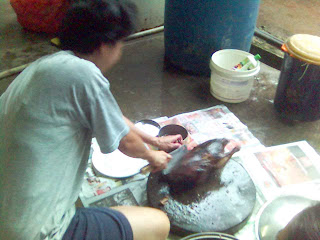 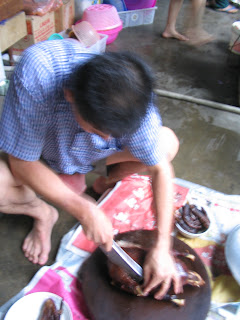 Crabs - This CNY, 4th uncle ordered live crabs, and 3rd uncle (again) was assigned to kill the crabs. Unfortunately he got bitten by one of the crabs, so 4th uncle had to take over the task.

Apparently, we need to also clean the crabs (which I doubt the restaurants ever do that). Below are photos of us cleaning the crabs before they are being cooked.

Check out the crab roe. We had to be careful not to dislodge the roe from the crabs. We even learnt how to differenciate the male crabs from the female ones. 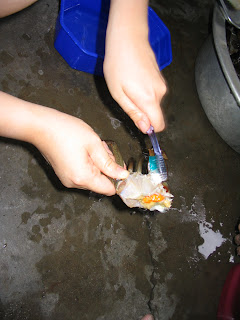 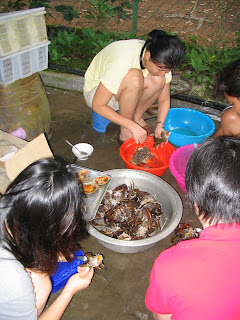 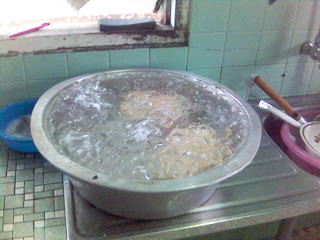 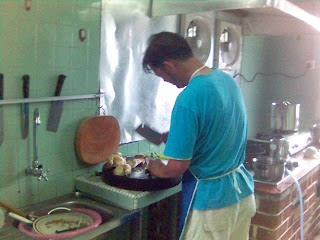 Carrot Cake (Lo Bak Gou) - Grandma makes very good carrot and yam cake, but I've never witness the process, only eating the cake itself. This year I followed her through the process, having being scolded many times for not taking exact measurement or understanding her process. This is grandma putting the carrot cake onto the 'steamer'. However, she refused to disclose how long should we steam the carrot cake because of superstition or 'pantang'. So our guess is as good as hers, but she already had experience, so she would know how long it would take. 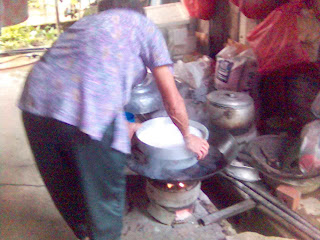 To cap it off, I had food poisoning the day I came back to KL :-(
It's hard to determine what is the source (as it affected a few of my relatives too) but I think it's due to the water.

Anonymous said…
Ahahahahahahaha, cooking looks so fun that I might want to try it out the next time we go back to Johor.
9:31 AM, February 22, 2007