Posted by n i l e e y on February 07, 2007
Here's an alternative to a cup of coffee - Chocolate Espresso Beans! 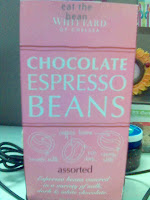 LL got this when she was either in US or UK (didn't ask her although the box said a product of Chelsea). I wonder if this is a much better alternative to a cup of 3-in-1 coffee because it's less sugar and cream while providing the same caffeine kick. I took four of those beans in two hours and was feeling "hyper" already. I can't consume much of it as well coz it was bitter dispite being coated with chocolate.

Anyway, it's only one box for the team, so it's just try-for-fun only. I hope I won't get addicted to it though!

Lilium said…
Oh..so it was u who was taking photo in the office. I thought I heard the sound of photo snapping but didn't bother as was busy. anyway, it does taste great. I took 2 of it..the dark choc I believe as those were the darkest among all..keke
11:00 PM, February 07, 2007