Posted by n i l e e y on February 11, 2007
2007 has been plagued with tragic deaths in the entertainment industry so far.

There was the suicide of Korean singer Unee and Anna Nicole Smith, while two more artistes in Korea and Taiwan respectively died in car accidents.

I was very shocked to read in the papers today that Jung Da Bin was found dead yesterday in an apparent suicide. She was 27.

There were translations from her personal homepage in cyworld talks about depression and ending her life. It was also reported she suffered from depression and attempted suicide before due to her waning career in the entertainment industry.
Jung Da Bin came to fame from the popular korean comedy sitcom Non-Stop. I enjoyed watching Non-Stop on Astro. I loved all their antics, including her potrayal of the rich but emtpy headed kid in school. She became famous in Asia due to the popular K-Drama Attic Cat. I liked the on-screen chemistry between herself and Kim Rae Won in Attic Cat. I always believe that the Korean entertainment industry is a very cruel and ruthless one. Every drama or movie, there will always be new starlets featured. If you make it, good for you. Then the challenge is to keep yourself visible as much as you can, or else you will be forgotten. She haven't really been acting recently due to lack of offers, and I believe it's a reason to drive a person to depression. The Korean entertainment industry also place great emphasis on looks. Although she certainly isn't one of the more beautiful korean actresses around, she does make up for that with her talent. It's really sad to know that the only way out of depression is through death itself. 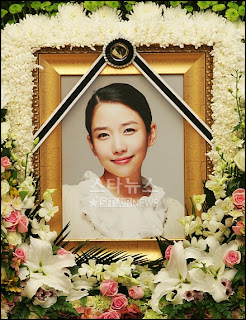 Javatia said…
Death is never a solution but that's perhaps the hardest thing for a depressed person to realize.
1:07 AM, February 12, 2007