Posted by n i l e e y on March 16, 2007
PAN - A Greek mythological creature with a human face and torso, but with hindquarters, legs, and horns of a goat.

And that's probably why the movie is called Pan's Labyrinth. 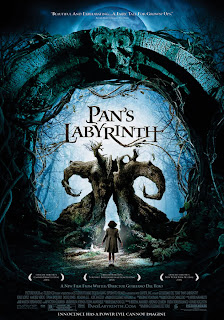 The story is about a young girl named Ofelia, who followed her pregnant mother to live with their new stepfather, who is the cold and ruthless captain of a Spanish army. Along the way, she stumbled into an old labyrinth near the farm, and met a fairy who lead her to Pan.
Pan tells her that she is actually a princess, but must now prove her royalty by completing three tasks before the full moon. Ofelia subsequently created her own fairytale and fantasy world in order to get away from the harsh reality.
If you are imagining this to be some fantasy movie like Narnia or Eragon, forget about it. Ofelia's fantasy world revolves around her as she witness the cruel world that she was never prepared to face in the first place. The storyline is dark and cruel, but it draws you to it like a flicker of a candle as you follow through Ofelia's adventures to complete the tasks. There are visually stunning moments, like when we are presented the huge dying fig tree that grace the movie posters. Even the most gruesome scenes were filmed so realistically. I was pleasantly surprised those scenes weren't censored by the Malaysian Censorship board as I squirmed watching how Mecedes stuff the knife into the Captain's mouth and then sliced it open.
The creatures are neither cute nor fancy. The faun is huge, old and creepy (unlike Mr Tummus from Narnia) . Even the fairies are actually flying stick insects. Perhaps the most intriguing fantasy character I've ever seen is the Pale Man. He is the creature guarding one of the items Ofelia is required to retrieve. He does not have any eyes on his face. Instead, he see through his hands, as the eyeballs are inserted there. I thought that's got to be the most original fantasy creature I've even seen. Oh, and he eats fairies and apparently babies too.

Unlike ototo-san and cousin Hean - who both thought this is an excellent fantasy film - I can't say I'm very thrilled with this movie as I never really expect a fantasy world to take place within a real world itself, although I say the integration was very well done. The cinematography is excellent (which was why it won the Oscar for Best Cinematography), and the storyline is great. The acting was excellent, and my heart pours for Ofelia, her mother, Mercedes and all those who died because of the captain. The ending is debatable. Some people may say it's a sad ending, but I think it may not be true because in Ofelia's eyes, it's a happy ending.
My only gripe? The audience.

Particularly the two idiotic teenagers sitting on my right.

When the movie began with Pan's narrative, the boy sitting next to me turned to his girlfriend and said "You mean this is not an English movie?"

When there was a scene whereby an opponent was shot point blank on the face, the girl giggled.

Same goes when the captain had to sew his left mouth that was slit open by Mercedes. You can see his action of putting the needle and thread through the lip. Just when you imagine how painful that is, those two jokers started laughing so loudly, as if it was a comedy.

You think that's funny. Wait till I put the needle through your lip, then you tell me it's funny or not.

Sigh. And I thought the Malaysian movie-goers are getting better.

Bad movie experience aside, I highly recommend this movie to those who just wants to watch a good movie, irregardless fantasy or not. Perhaps you may even feel the magic that touched so many others around the world.
Entertainment Zone Movies