And US Postal Service is planning to commemorate their 30th anniversary by issuing a set of 15 stamps!

[Hyperventilates]
One can even vote for their favourite Star Wars stamp of the series. The winner will be re-issued at mid-year as an individual stamp.

Just click on the link below and let the Force flow through you to cast your vote.

The Force is strong with you

I'm supposed to let the Force pick my favourite stamp, and somehow it always lead back to DARTH VADER.

Never underestimate the power of the Dark Side
It's either that, or the Millennium Falcon. If the lightsabre fighting scene was between Darth Vader and Luke Skywalker, I would have probably voted for that right away. As much as I love Han Solo, I probably won't vote for that stamp.

I'm not sure if USPS will allow online sales for this, because I really love those stamps. I guess chances that it will be highly unlikely though.

Oh, can I also get one of those cool R2-D2 mailboxes as well? 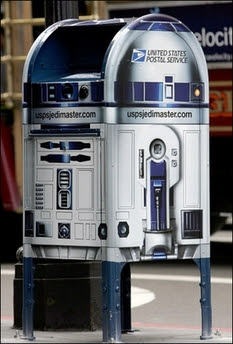