Posted by n i l e e y on May 11, 2007
I enjoy card making. My memories of card-making has always been for happy occasions.

Last week, however, I just made a farewell card for one of my closest friends who just left the company. 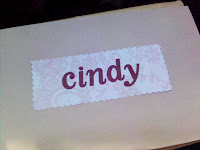 Card making can come with emotions. especially if the card is for someone special.

I get quite annoyed at times when people I suggest I make cards for their friends, or on behalf on somebody else. The only time you make cards for other people is when they PAY you to do it. I'll probably do it for you only if I have the intention of doing it. I don't make cards for everyone.

Back to the card.

It was probably the longest card I've made, the length is about 35cm long. Materials are from the scrapbook shop Papier Love located at The Curve.

When you are making a card for someone special, naturally you want the best. Unfortunately, the best can also cost you a bomb. Craft supplies aren't cheap in Malaysia. But again, because of her, I am willing to do it.

After spending the entire weekend working on the card, here it is : 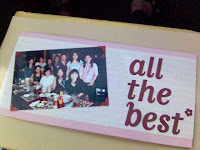 Probably my only regret was too few people could write something on the card. But then again, that was my intention as well - to make the card exclusive to those who worked with her before.

When I see her face brightened up after receiving the card, it's heartbreaking- this is a for a sad occasion. I would never see her in office again. I could only be glad she likes the card, and knowing it comes from my own effort, and that she will one day open it and start reminiscing about the past.

I've also made a Pixart photobook for her. 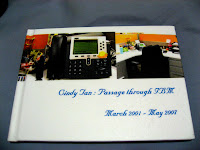 The irony was that she was the one who suggested to make this photobook for another of my closest friend Adeline who left the company in March.

She has no idea she will be receiving one too.

When I look back at the photos of our time in the company, it brings back cherished memories. We were close knitted, even when she subsequently moved out to other teams.

Again, I believe a photobook should be something of a personal effort. It is the satisfaction of making the photobook that makes it so special and meaningful, both to the giver and the recipient.
Will be meeting up with her for lunch later today. Hope she will love the photobook. And I will not cry.
Crafty Nileey Photobook