I grew up in the Eighties - no PS2, no Internet, no handphone, no DVDs, no Astro. I have vague memories of my favourite cartoons, but at least I still remember how most of them are like.
Since there are so many cartoons I used to watch during my childhood, I will cover them bit by bit. These are cartoons which were shown on our national TV during the Eighties, but not necessarily was produced during that era.

Now who don't like the Smurfs? They are so cute, have a catchy sing-a-long theme, and have interesting adventures in each episode.
The Smurfs are basically a huge colony of tiny blue men in identical clothing living in a village, where they go about their daily chores. However their life seems to be full of excitement, as they battle danger in the form of the evil Gargamel.

As a kid, I enjoyed watching the Smurfs' adventures, especially trying to avoid being captured by Gargamel and his useless cat Azrael. I still remember how Smurfette came about (she was created by Gargamel) although I'm not too sure when Baby Smurf made his first appearance. My favourite characters are Papa Smurf and Baby Smurf. I used to have a huge collection of Smurfs figurines, but unfortunately gave them away many years ago.

As I grew older, I'm actually quite amazed how people question the concept of the cartoon, from comparing the Smurfs lifestyle as communism, to Smurfette provoking incest among other Smurfs. Anyway, this is a cartoon meant for kids, so I'm going to remember it as such.
Care Bears

I was introduced to Care Bears by one of Oka-san's friend's daughter. The Care Bears are a bunch of furry, friendly and cuddly bears, whose mission in life is to spread the spirit of love and caring on earth. This is measured by Caring Meter in their residence. The Care Bears live in a place called Care-A-Lot, while their animal cousins live in the Forest of Feelings.
I love how each Care Bear comes in a different color and with a specialized mark on its belly that represents its duty and personality known as their "tummy symbol". My favourite bears are Tenderheart Bear, Wish Bear and Funshine Bear. Subsequently when Care Bear Cousins were introduced via the Care Bear movie, I like Brave Heart Lion, Cozy Heart Penguin and Gentle Heart Lamb. 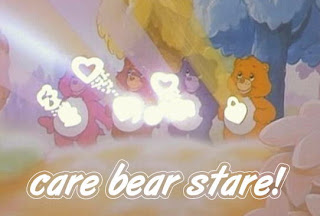 The most significant action I can remember from Care Bears is the "Care Bear Stare" whereby the bears will stand in line, and radiate light from their respective tummy symbols to form a ray of love to the person's heart.

As much as I like Care Bears, I didn't have any of its figurines nor soft toys. Perhaps it was too expensive then. However, I still see Care Bear merchandise being sold in shopping malls. Guess that shows its staying power (or rather the power of nostalgia).

Lilium said…
I love to watch Smurf a lot. I can remember the song very well even up to now. Lalalalala..

Care bear was also my favourite. I did imagine how nice it would be to able to hug one. Can't really recall if there was a special bear I really like.
10:51 PM, June 23, 2007

Anonymous said…
i was just thinking of blogging abt my fave cartoons from childhood ! i loved carebears!! i used to watch it every saturday, but i think i was too young to understand the dialogue and everything..just watched for the colorful and cute bears. haha. i remember grumpy bear? ( the one who's angry all the time)and lionheart!
5:46 PM, June 24, 2007