Here's Part 2 of Cartoons Flashback - this time featuring action heroes. Contrary to popular belief that action cartoons are meant for boys, these cartoons were very popular among both sexes. I'm not sure if the same applies to today's cartoons.
PART 2 - ACTION HEROES Thundercats evolves around the adventures of the Thundercats in a planet called Third Earth, after escaping from their ruined home planet Thundera. In Third Earth, they need to fight with the Mutants of Plun-Darr, the Lunataks, and of course, Mumm-Ra himself.

The Thundercats are led by Lion-O, who is coincidentally the hereditary ‘Lord’ of the ThunderCats. His weapon is the Sword of Omens which contains the Eye of Thundera, the source of the Thundercats' powers. His signature command while holding the sword is "Sword of Omens, give me sight beyond sight", of which allows him to see where danger is happening. The other command is the Thundercat Signal, when he will use whenever Lion-O needed help. He will shout (together with some action) "Thunder, Thunder, Thundercats, HO!". The Thundercat signal will be reflected high in the sky (similar to Batman) so the other Thundercats will take notice and come and help him.

The other members of the Thundercats are Panthro, Tygra, Cheetara, WilyKit & WilyKat, Snarff and Jaga the Wise. They all live in a place called Cat's Lair, which somewhat reminds me of the Sphinx in Egypt. They also drive a vehicle called the Thundertank which is basically a very tough MPV! 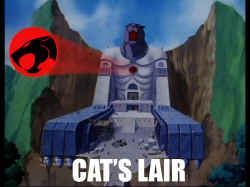 Of all the villians the Thundercats faced, none the bigger threat than Mumm-Ra.

Mumm-Ra is a very strong mummy who lives in a pyramid (duh!). He is constantly trying to get hold of the Eye of Thundera because of its powers but of course fails most of the time. Mumm-Ra is usually seen bound like an ancient mummy. However, he can summon the power to transform himself into a more vigorous form - Mumm-Ra, the Ever-Living. His only weakness in this form is his own reflection.

Other regular villains are Slithe, Jackalman, Monkian and Vultureman. In later episodes we are introduced to another bunch of villains called the Lunataks, led by a very short, old lady called Luna.

IMHO, Thundercats was THE most iconic cartoon ever shown on TV during the eighties. All my classmates watches Thundercats and will discuss about it in class the next day. I enjoy watching the adventures and to know what happens next to the Thundercats. There was even a merchandise tie-in with KFC (if I remember correctly). Ototo-san didn't have the Sword of Omens like many other kids do, but he has a complete set of bed sheet, pillow and bolster cover. I'm very curious how the movie will turn out to be like.
There's this homepage that pays tribute to Thundercats. They even have the audio files of various quotes and commands for each character. Anyone who misses Lion-O's command, or Mumm-Ra's transformation can check out this site.

They are siblings (twins actually) who have their own respective series, which I suspect is to cater for both genders.

Both cartoons have similar characteristics, probably due to the fact that they are twins so the producers must be fair to both. Here's my comparison list : While I watch both He-Man and She-Ra, inclination is naturally toward She-Ra, coz I'm just a girl fascinated with a heroine with super powers, and He-Man wasn't all that good looking anyway. 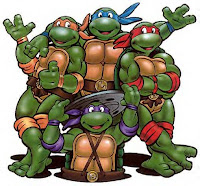 TMNT, or more frequently known as Ninja Turtles comprises four turtle mutants trained to be skilled ninjas who fight the forces of evil in the city of Manhattan from their sewer home.
Each of the Ninja Turtle wears a colored mask, and is named after a famous artist from the Renaissance period : Leonardo (blue), Raphael (red), Donatello (purple) and Michelangelo (orange). They are trained by their sensei/sifu/teacher Splinter, a huge mutant rat clad in a kimono. They are also good friends with April O'Neil, a pretty reporter in a yellow jumpsuit, and Casey Jones, who looks like a less scary version of Jason from Friday 13th. Their arch-nemesis is another ninja called Shredder and his two mutant henchmen Bebop and Rocksteady.
What I probably remember most about the Ninja Turtles is Michelangelo's trademark phrase "Cowabunga!" and their love for pizzas. I remember playing the video game as well, but can't remember if it was PC, or GameBoy.

Honestly can't rmb anything about He-Man.