I'm not so much a fan on robots, but I very vaguely remember watching these cartoons. These were the must-watch for the boys. The Transformers is a cartoon focused on the war between the Autobots (good robot) and Decepticons (bad robot) on earth. It started when both the Autobots and Decepticons, during the great Cybertronian War, crash landed on earth. Millions of years later, a volcano eruption revives the warring factions - the Decepticons want to drain the earth of its vast energy resources for their own use, while the Autobots seek to protect the inhabitants of earth from that fate. With that a war erupts between both, with the humans stuck in between.

The leader of the Autobots is Optimus Prime. He is a very compassionate leader, and has dedicated himself to the protection of all life, especially the inhabitants of earth. He transforms into a huge red truck, and is easily one of the most recognisable characters in the series. Other key Autobot characters are Bumblebee, Jazz, Rachet and Ironhide (some only I recall after watching the movie and referring back to Ototo-san's Transformers Universe book).

Megatron is the leader of the Decepticons. Powerful and ruthless, his only fitting enemy is none other than Optimus Prime. His primary form of weapon while in robot form is the arm-mounted fusion cannon, which is capable of leveling a city block in one blast. Megatron delivers even more powerful blasts when he transforms into a gun. His most 'loyal' sidekick is Starscream. 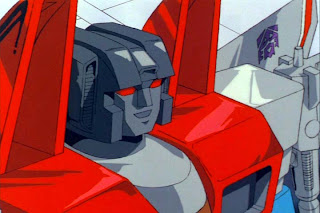 This may sound very weird, but as much as I like Optimus Prime and Bumblebee, my favourite Transformer at that time was actually Starscream. Perhaps it was the voice, or the character, but I think Starscream was a very good looking robot. Plus he had the guts to even think of ousting Megatron himself, yet always disappointing his master, hence leading to the famous quote "You have failed me yet again, Starscream!"

Ototo-san owned a few Transformers toys, most significantly the entire Constructicons set, which can be merged into Devastator. I remembered that time, the last of the Constucticons named Mixmaster (cement mixer) could not be found in Malaysia. Oto-san actually got it from Singapore, which made the whole set complete. Not sure what happened to the toys now.

Speaking about the Transformers, I've watched the movie and liked it a lot, although I lamented that most of them looked so sophisticated now I could not recall how they looked like in animation form. However, they kept certain parts true to the Transformers that we once knew: The relationship between Megatron and Starscream; The tagline "More than meets the eye", the tribute to the old Beetle that represent Bumblebee. I was very pleased they made Starscream looks so cool while destroying the fighter jets :)

Will there be Transformers 2? It won't be long before we will find out. From days of long ago, from uncharted regions of the universe, comes a legend; the legend of Voltron, Defender of the Universe, a mighty robot, loved by good, feared by evil. As Voltron's legend grew, peace settled across the galaxy. On Planet Earth, a Galaxy Alliance was formed. Together with the good planets of the solar system, they maintained peace throughout the universe, until a new horrible menace threatened the galaxy. Voltron was needed once more. This is the story of the super force of space explorers, specially trained and sent by the Alliance to bring back Voltron, Defender of the Universe!

Voltron comprises five Robot Lions on the planet Arus. Voltron was designed to protect Arus, but was somehow neutralised by the evil King Zarkon. Many years later, a team of explorers sent by the Galaxy Alliance arrive at Arus. They recovered the five Robot Lions (located at various locations) and then formed the new Voltron Force. 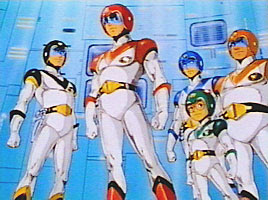 Voltron was not as popular as Transformers, but I remember watching it from time to time. I always remember the first episode when all five Robot Lions combined to become the mighty Voltron. Unfortunately, I can't recall the rest of the cartoon anymore.