During the late eighties to early nineties,there were some new Disney adventure cartoons being shown on TV - Ducktales, Chip & Dale Rescue Rangers, Duckwing Duck, Goof Troop, Gummi Bears, Gargoyles. Of all I only watch three of them, which I will cover here. This one will also have the opening credits because I think they are one of the most memorable ones from my childhood, and come to think of it, they have pretty interesting lyrics too.

The Gummi Bears cartoon evolves around the adventures of seven Gummi Bears who lived in an underground place called Gummi Glen. They are (from left to right) : Grammi (orange), Cubbi (pink), Gruffi (brown), Sunni (yellow), Tummi (blue), and Zummi (purple). 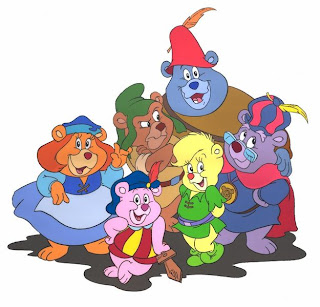 What makes the Gummi Bears special is the Gummiberry Juice of which gives them the temporary ability to bounce. If the juice was consumed by humans (or ogres) they would gain temporary superhuman strength, although the effect would only work once a day and tended to wear off after about a minute on them. Gummiberry Juice also serves as fuel for various Gummi devices, especially flying machines. For these reasons the bears kept the recipe secret.
The Gummi Bears do not just live on their own, they also interact with humans. They are friends with Princess Calla (shown below) and a lad named Cavin. They also have enemies, of none more threatening than Duke Igthorn and his horde of Orges. 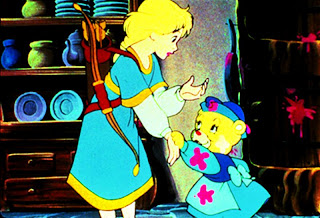 I enjoyed watching the Gummi Bears because it was a refreshing sort of cartoon during that time, although I don't have any particular bear that I like. Oh, the theme song is really, really catchy (especially if you watch the opening credits where the bears are really bouncing everywhere while the song is being played)
"Gummi Bears
Bouncing here and there and everywhere
High adventure that's beyond compare
They are the Gummi Bears"

If you have been a follower of Disney cartoons, you could already be familiar with the main cast of Ducktales - namely Uncle Scrooge McDuck and his three grandnephews Huey, Dewey and Louie. This cartoon evolves around their adventures in search of treasures and more money, as well as fighting off the bad guys.
In this series, Scrooge McDuck resides in the city of Duckburg. The nephews are staying with him while their Uncle Donald went to join the Navy (he was featured in certain episodes wearing a navy suit). Other main characters are Launchpad the pilot, Gyro the absent-minded inventor, Mrs Beakley and her granddaughter Webby. 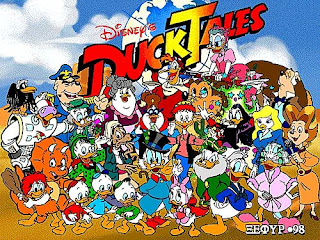 Scrooge is always on the go to find how to make himself richer, be it a new treasure somewhere around the world, or a new business idea. His nephews are constantly roped into his adventures as well. However, it is not always about that. Scrooge has to constantly fend off his greatest nemesis, namely filthy-rich competitor Flintheart Glomgold, the Beagle Boys and raven-haired witch Magica De Spell. 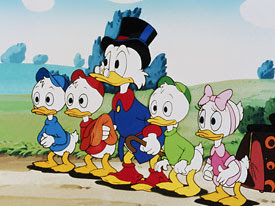 Ducktales is my favourite Disney cartoon among the three, mainly due to its Indiana-Jones like adventures and interesting storyline. One of the episodes that I always remember is this episode titled "Too Much of a Gold Thing" whereby Scrooge and his normally level-headed nephews caught the gold fever in an Aztec-like golden temple, looking for the Golden Sun Discs. It was their greed that triggered the curse, causing the temple to collapse. They managed to escape in time thanks to Launchpad.
We even had the Ducktales PC game then. I have to admit the game was addictive because it was a platform-based adventure game, and each time there is a different challenge. But maybe more on that later.

Instead of the two furry chipmunks whom always quarrel over acorns or busy driving Donald Duck up the wall, this time Chip and Dale put on their thinking caps as they attempt to solve mysteries and fight crime. Oh, and they actually don some cool clothes and speak proper English too.
They don't just fight alone, but have their friends to help them as well - Gadget, a female mouse who is an inventor, pilot and mechanic; Montery Jack, a huge mouse who can't resist cheese, and Montery's sidekick Zipper, a tiny green housefly who buzzes around. Their greatest enemies are criminal mastermind Fat Cat and mad scientist Professor Norton Nimnul.

I like Chip and Dale, even before Rescue Rangers was released, hence it was natural to follow through this cartoon. Initially I wasn't used to hearing the chipmunks talking instead of the usual jibberish, but after getting used to it, it's nice to finally understand what are they talking about :)