Posted by n i l e e y on August 31, 2007
Early this year, Air Asia was giving away 1 million tickets FREE. Tham quickly called us if we are interested to go on a short trip. In less than 24 hours and countless phone calls, seven of us confirmed our trip to Kota Kinabalu, Sabah in August 07. It would be the first trip to KK for four of us. Whereas for Tham, his mum and sister, it would be some sort of balik kampung, as his mum lived in Sabah many years ago. We also plan to take the opportunity to visit our friend Chee Jiat whom we haven't not met for many years. 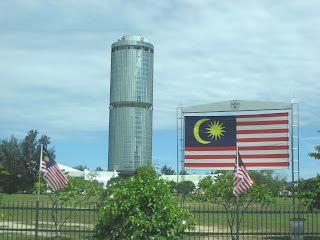 Yayasan Sabah Building
I met the gang at the LCCT in the evening after a hectic half day in office. The gang comprises Link, Eric, me, Tham, his mum and sister. My boyfriend could only join us on Friday. 2 1/2 hours later, we finally landed at Kota Kinabalu International Airport. Thank goodness Chee Jiat was already there to greet us! Apparently his handphone was under repair which was why we couldn't get hold of him at all.

We were staying at the Marina Court Service Apartments. It is located along the Esplanade facing the sea. We didn't get a room with sea view, but that's ok - the view wasn't too nice to begin with.

Our first night there was horrible! Everything is so worn out. The worst is the toilet bowl whereby you need to dip your hand into the tank to flush it. Yucks! It was comparable to Ria Apartments in Genting.

Luckily we gotten a much better unit in the new wing subsequently. Most importantly the toilet flush works this time around!
Kota Kinabalu (formerly known as Jesselton) is the capital of Sabah. Located at the west coast of Sabah, KK is a city bustling with activity. It is also very obvious that tourism is a very lucrative source of income for this city, judging by the upcoming development projects (mostly shopping malls) and availability of foreign brands (Coffee Bean, Adidas, MNG, Mont Blanc) in this city. 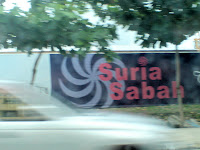 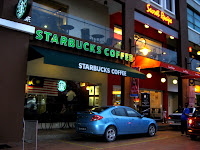 The city's population comprises a mixture of different races and ethnicities such as Kadazan, Chinese, Bajau and Malays. There are lots of Filipinos as well. We can't really tell who's who on the streets so I guess you can't group all of them and say they are Malays or Kadazan. Most of them speak Bahasa Malaysia, but with a distinct accent. Kadazandusun is also widely used among the Kadazans. The Chinese mostly speak Mandarin.

There's nothing much to shout about in KK as we are here mainly for the outdoor activities, which are usually more than an hour's drive from the city itself. 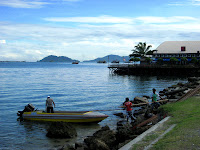 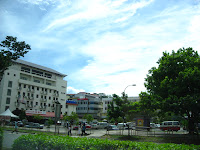 Our main itinerary in Kota Kinabalu are as follows :