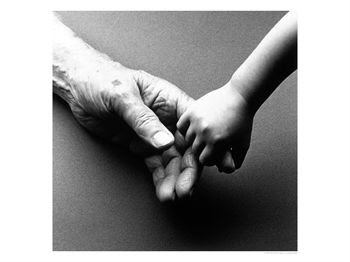 The last time I met up with both my late grandfathers, they were already old and ill.

Both could barely speak, unable to move on their own, and perhaps not even able to recognise people anymore. Most of the time they are either sleeping or lying awake, staring to the ceiling, or just at us, as if we were strangers.
However, during both occasions whereby I needed to return back to KL after staying in my parent's hometown, I would go over to my grandfather, hold his hand, and tell him "Ah Gong, I am going home".

It struck me now, that at both occasions I bade farewell to my grandfather, their hands gripped mine so tightly as they looked so intensely into my eyes, as if trying to tell me something. I can feel the emotions in their eyes - They can't speak to me, yet I hear them. It was as if they were saying they remember who I am and they love me very much. My heart ached when it was time to go home, and I need to let go of their hands while having to feel the emotions run through me as I leave.

A simple touch - even a gesture of holding hands - is a powerful means of expression, even more so than many words. Thank you to both my grandfathers for rewarding me this experience.

"Too often we underestimate the power of a touch, a smile, a kind word, a listening ear, an honest compliment, or the smallest act of caring, all of which have the potential to turn a life around."