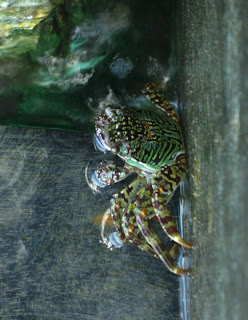 After the excitement from white-water rafting on Saturday, we proceeded to Pulau Manukan and Sapi on Sunday.

Karina made arrangements with Beach Bums Borneo, who basically handled our itinerary for the day. It seems that Beach Bums handled almost everything relating to the islands, from the providing the boat shuttle service, the rental of snorkeling equipment, the water sports, right up to catering lunch in one of the islands. Our trip was RM85 per pax for shuttle, rental of snorkeling equipment and life jacket, as well as BBQ lunch. We had to pay extra for the water activities.
We departed from the Beach Bums jetty located at Tanjung Aru at 9am. It took us around 10 to 15 minutes to reach Pulau Manukan. 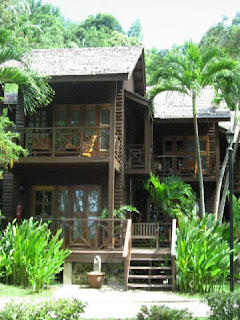 Pulau Manukan is one of the five islands that belongs to Tunku Abdul Rahman Park. The other four are : Pulau Gaya, Pulau Sapi, Pulau Mamutik and Pulau Sulug. Pulau Manukan is the Park's second largest island.

When we got to Pulau Manukan, there was initially some miscommunication with Karina regarding the entrance fees, but we got that sorted out pretty quickly. We hurried over to the point of the island where we could start snorkeling. On our way, we passed by some really nice chalets. I wonder how much it costs per night.

At first glance, Pulau Manukan really have a lot of activity in store for all. There's snorkeling, water sports, swimming, nature walk, or one can just relax on the beach watching the sunset. We were determined to snorkel. That was until the Beach Bum person approached us with a list of water sports we can engaged in. Immediately everyone dropped their gear and started pointing at the paper "I want this, I want that". We ended up choosing para sailing and the Flying Fish. 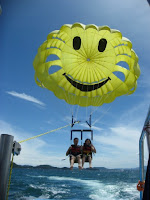 And such fun and laughter we had!

I opted for para sailing with my boyfriend. Basically we were hoisted onto a big smiley yellow parachute and dragged by the speedboat. The view from the top was simply spectacular. We could see the islands, Mount Kinabalu, and the beautiful sea. It was just unfortunate I can't take photos from the parachute. There were times the driver felt cheeky and stopped the boat, letting us plunged into the sea. It wasn't so scary as compared to whitewater rafting because we were supported.

The others opted for the Flying Fish. It was similar to the Banana Boat, but from the looks of it, it was 100% more thrilling! The Flying Fish raft is tied to the speedboat, and the challenge is to cling on to the inflated raft as the boat zooms by. We had so much laughter when we saw Chee Jiat tumbling down from the Flying Fish and the Tham's stories of him screaming "Let me go!" and "Stop! Stop!" throughout the journey. Each time they managed to reach a vertical position, we will scream and clap and cheer for them. Link exclaimed it was the most tiring ride she ever had! I didn't take this because I wasn't sure what was in store for me. Lucky in a way because it was really a tiring ride, and everyone's hand and arms were aching after this.

By the time we returned to Pulau Manukan, it was already time to depart to our next destination - Pulau Sapi. 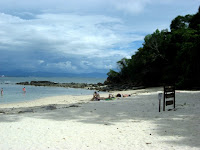 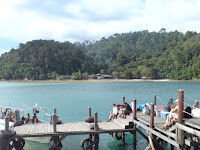 Pulau Sapi is a much smaller island, especially when compared to its neighbour Pulau Gaya which is also the largest island among the five. The boat ride was approximately around 8 – 10 minutes from Pulau Manukan. The minute we reached the jetty we eagerly headed over where everyone else is having their lunch.

The lunch area is a personalised buffet concept. This means that instead of having hundreds of people queuing up for food, each table has their own allocated buffet. Once the selected dish is depleted, then the 'waiter' will top it up. There was satay, grilled fish, prawns, baked crab, chicken wings, fried vegetables and sweet potato. Although the selection was very limited, nevertheless we gobbled up the food as we were famished. 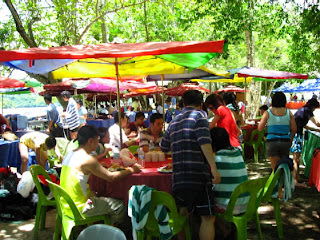 As soon as we finished lunch, we headed for the beach. After lathering ourselves with sunblock, we got hold of our snorkeling gear and step into the cool sea water. Immediately my friends were already squealing with delight - there were so many fishes, even in shallow waters. We quickly grabbed the loaf of bread we bought, and then it was feeding frenzy time. These fishes must have been used to visitors feeding them for they do not seemed to be afraid at all. I put on my snorkeling mask and get to see the fishes close up. Excited, we all decided to head towards the deeper end of the sea.

As this was my first time using the snorkeling gear, it took me a while to get used to breathing through my mouth and to adjust the mask so that the water won't seep into it. I think I bit the mouthpiece too hard, as if trying to chew on some really tough gum! Throughout the journey I keep seeing different types of fish. Some of them were plain and plentiful (ikan bilis and some striped fish), whereas some were truly very beautiful (blue and purple coloured fish). However, one thing I noticed when I was trying to adjust my mask when were were going deeper into the sea, I kept bumping into some pretty course stuff despite being supported by the life jacket. Rocks? I'm not sure. My boyfriend was also struggling to get used with the mouthpiece, and he needed to step onto a flat surface, but somehow it was very rough and he kept getting cuts and bruises. He gave up in the end :(

I followed him back to the shore, and after a short break feeding the fishes with Link and Eric, Tham came over telling us excitedly that he saw more beautiful fishes at the deep end of the snorkeling point. I decided to give it a try again, and followed him back to the sea (after reminding him countless times to watch out for me in case I get lost and panicked!). This time I had the chance to look down to the ocean floor as I swam. I finally saw what was bothering my boyfriend and I all these while - Coral.

And they were HUGE.

It was as if this place was a coral paradise if it wasn't all dead. 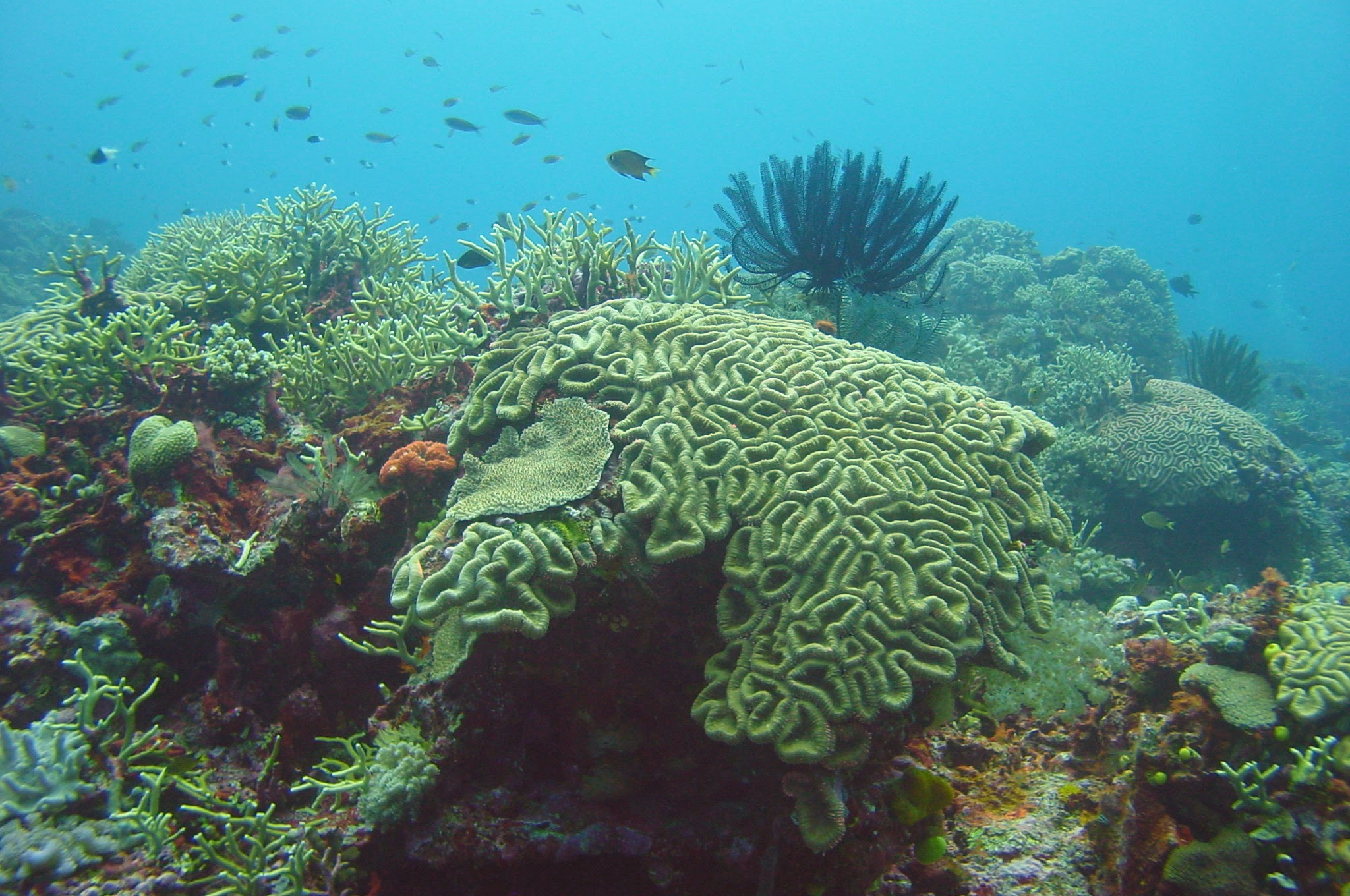 My heart was just broken after seeing so many dead coral around me, I guess due to too many people snorkeling and probably just stepping on them on their way. Nothing much I can do here now as the damage has been done. But I felt really sad, and no longer that excited to snorkel anymore. But since I'm already halfway through, might as well continue the journey.

As we progress deeper towards the sea, I noticed two things :

1) The corals were no longer white, most of them were mostly brownish green, indicating that they were dying. There were occasions I caught sight of the coral's original form, which was a kaleidoscope of colours. There were different types of fish as well. I even spotted a brown version of baby Nemo swimming among the coral.

2) The corals were getting very huge, with different shapes -round shaped, fan shaped, some like branches as well. And somehow, despite us swimming towards the end of the snorkeling point, those coral felt like they were just below me and I could just kick into them any second.

At that point, I panicked.

The waters weren't deep as I hoped they would be. I shouted out to Tham. He came to me and remarked that the water seemed to be receding as he also felt it wasn't as deep as just now.

It was already low tide.

I told him I needed to swim back as I was afraid of hitting into the coral beneath me. And so we swam back. By that time it was past 3pm, so we all decided to change and get ready to depart (the last shuttle was 4pm). 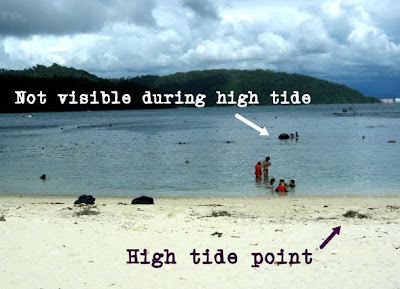 All in all, it was a good trip. The only complaint I had was that we didn't have enough time! I would definitely come back to visit the islands again, and hopefully would be more courageous to try out the Flying Fish and get to see more coral, fishes and maybe a turtle while snorkeling! 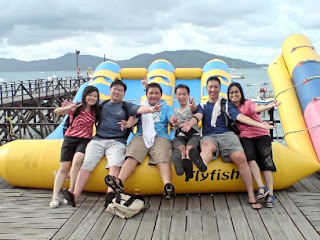