After waiting for more than half a year, I finally received my belated birthday/Christmas gift - a new Sony Ericsson K810i handphone!
My wish list last year was actually the K800i, of which my boyfriend promised to buy if I was willing to wait.

By then, the K810i was released in the market. Apart from having all the features of the K800i, it is lighter and have a couple of enhancements (most notably the keypad and Photo-Fix). Since both are the same price, might as well get the newer model, even thought I still prefer K800i's keypad.

I applaud Sony Ericsson for creating a different range of handphones to cater for different niche of users - most prominently are the Walkman and Cybershot phones. As I like to take random pictures, the Cybershot phone is a natural choice. I could have waited till year end till the 5 megapixel camera phone K850i is released but decided not to do so. The 3.2 megapixel K810i is good enough for now :) 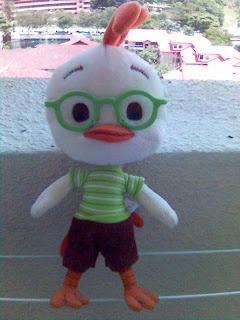 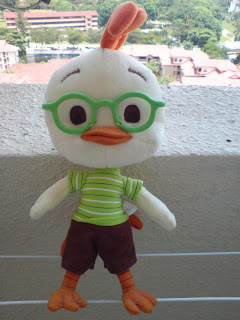 The K810 also has this nifty feature called Photo-Fix that automatically adjusts light balance, brightness and contrast. Basically it allows you to fix any photos that is underexposed.
Taking Chicken Little as an example again. The original photo is on the left, while the right shows it after Photo-Fix. 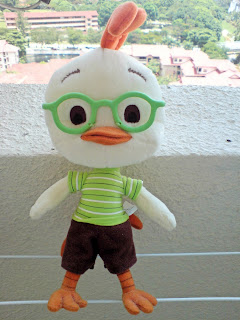 The K810i also has a cool function called Blog This, which links back to Blogger. (cool!) Unfortunately the services is not available in Malaysia. (not cool!) I am keeping my fingers crossed we will be able to do so soon.
Haven't had time to explore the other functions yet, but I'm definitely excited over my new toy! Oh, did I say I love my new phone?