Posted by n i l e e y on April 25, 2011
In preparation for baby's arrival, hubby and I went bargain hunting at the recent Pureen Warehouse Sale held over the weekend. As we were obviously newbies to warehouse sales as compared to the seasoned shoppers, it was really quite an experience for both of us.

We reached the warehouse close to 11am and the place was already sardine-packed with shoppers. I read from other blogs people will wait as early as 8am although it was supposed to start at 10am.

We went to the Pureen Pride N Joy corner first, which was located at another section of the warehouse. Having to squeeze our way through eager shoppers, crying babies, frustrated toddlers and bored-looking dads, we finally found our way there but some of the more popular items were already gone. I was looking out for diaper pants which costs around RM15 retail price. Alas. most of it were already gone! I took a few remaining pieces which costs between RM5 - RM8 per piece. Later I spotted one lady who obviously had grabbed all the diaper pants, she was holding on to a basketful of them! 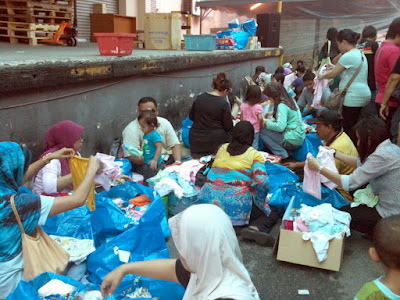 All along the walkways we see many people sitting down and sorting out their purchases. It seems it is a common tactic to grab all you can and then slowly sort out what you need later. The problem is that they just sit around all those Ikea bags, one have to ask if those basket are theirs or not. If it is not theirs, you can sort through the contents of the bag too.

After getting some clothes which was super-duper cheap - RM1 to RM3 per piece, two-piece set costs around RM10 - we realised we have to head back to the front entrance to get our other stock such as nappy liners, napkins and baby wipes.

That area was so difficult to move around! I think it is due to the fact that it was mostly bulky items such as diapers, shampoos and detergents, and was next to the cashier and the entrance. Hubby managed to get a box for us to put in our purchases, mainly baby wipes. I got napkins, nappy liners, stretch mark cream, cotsheet and nursing pads. After that, it was back to the Pride N Joy area to pay for our purchases as we think the queue is shorter and not so hot and stuffy. 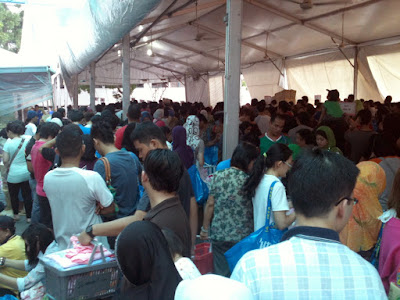 Check out the queue! It was so long! But I do agree it was not so stuffy due to the higher ceiling and better ventilation. We waited for slightly more than 2 hours before it was our turn at the cashier. I was so relieved when we made it out from the warehouse.

So here's what we bought from the warehouse sale : 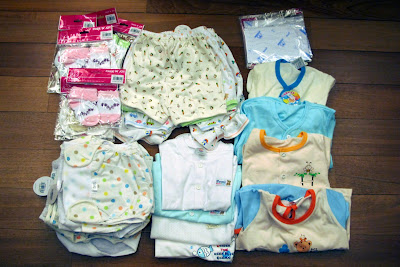 I had this slight regret not buying more tops during the sale. After all, it costs only RM1 - RM3 per piece, and baby still needs be changed a couple of times a day. We only had limited choices of mittens and booties, I've seen nicer ones being purchased by the other shoppers. 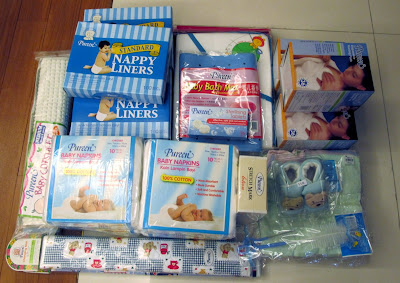 Nappy liners, napkins, towels,changing mat and cot sheet among others.
Generally the prices of these goods are 40% cheaper than retail. 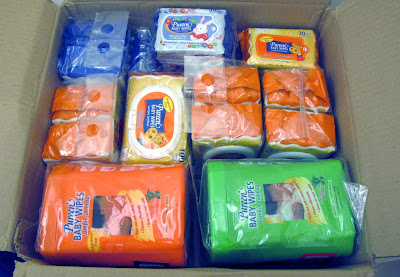 Did we go overboard with the baby wipes?

Overall it was an interesting experience, and I believe we got ourselves a good bargain too, just that the queue time was too long. I also learn certain tricks and tips from the experienced shoppers.

I wonder if hubby is still interested to go for the next warehouse sale after this trip?

Lilium said…
Wow! This is what I call early planning. I only started buying things for Matt when I was 8 months pregnant =)

Wah! The people sorting their stuff out is like as if they are at pasar borong/malam =p

Don't think you went overboard with the wipes and wipes in Msia are really expensive. I was shocked with how expensive they were when in Msia recently. Luckily, it's cheap in the UK. Wipes such as J&J is still cheap from the UK after conversion.

A little tip on saving wipes. You can also use baby cotton pads to clean baby bum bum. First clean the 'big mess' with wipes and then clean with cotton pads dab with water. For wee wee only, you can just use the cotton pad with water. It's also good for the bum. Less chemical on them too.