Posted by n i l e e y on October 11, 2015
Legoland Malaysia is celebrating Halloween Brick or Treat this entire month of October. The event is held specifically every Friday and Saturday, from 4pm to 830pm.

We attended our first event there over the weekend ever since we got our annual pass. We went there around 530pm. Most of the activities are organised around the Castle area, which was considerably well decorated for Halloween. There's a lot of visitors, mostly with children who wants to have some fun. When we were there, there was a photo session ongoing with LEGO Frankenstein, Wicked Witch and Vampire. DC was too afraid to take a photo with them. Sigh...

There are lots of activities for the kids. First booth was the free face painting. DC chose to have her hands painted instead - one side pumpkin, the other side a bat. She wanted 2 pumpkins at first but I suggested she try some different design, which she did.


There is also a cupcake decorating booth but you need to pay RM12 to decorate 2 cupcakes. I decided to let her try doing that next time as we were rushing for time (I planned to go back by 7pm). We then proceeded with the Brick or Treat trail, in which in the end she got a goodie bag full of treats for completing the trail.

You can also build some LEGO Halloween figurines at the kids activity booth. DC choose to build a cat.


Not an easy task, especially she does not have prior experience in building LEGO according the instructions. Took a while for us to complete the entire cat but it is an achievement for her!

Next up was the Monsters and Witches show. It was an interactive show for the children where they compete against each other to finish up certain tasks, and will receive some prizes for doing so. 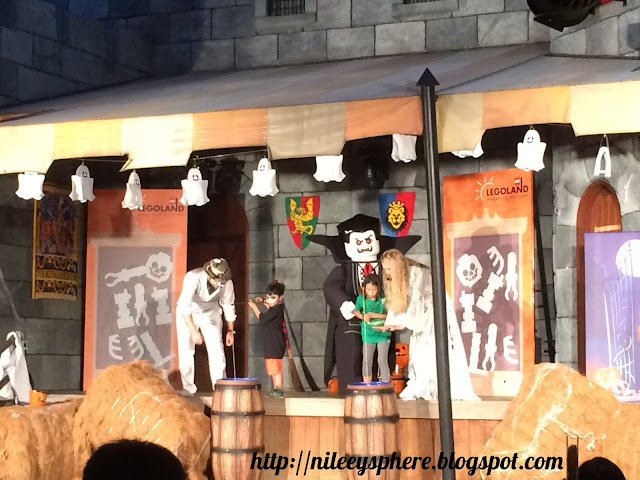 The children who volunteered were all very competitive but they had a lot of fun completing the tasks. However, I personally find the male actor representing the monsters having a great sense of humour (To Vampire : Hey! It's been a long while, you are looking a bit pale aren't you? Not enough sun,eh?) Hahaha!!!

We left around 730pm that day, due to the show. We did not visit Miniland but I was told they also added some Halloween scenes in some of the landmarks, One last photo of the castle at night, resolution not so clear because I used my handphone :(

Here is a photo of the goodie bag. We got some stationery, vouchers, candy, some souvenies from Maybank. The highlight of the day has to be these really cool printed DUPLO tiles, a fantastic souvenir courtesy of Legoland Malaysia :)

We will try to make it there again on Halloween day itself, need to think of what costume to put on for the kids. Pumpkin and bat perhaps?