Posted by n i l e e y on October 28, 2018
So now it has become an annual ritual to visit Legoland during the month of October for their Brick or Treat Halloween event. We were there in 2015 and 2016. In 2017, we took a break from Legoland as I just delivered my youngest in July. Now that he is already 1 year old and an active running toddler, we decided to renew our annual premium pass membership and hence able to attend this event again.

Legoland was more generous this Halloween. Annual premium pass holders can bring in one guest for free. Children between 4 to 12 years old can enter the park for free if they are dressed in costume. We went with Grace's family on the 26th October 2018. It was a cloudy and gloomy evening, and even rained during the time we were there. D was dressed as a spooky witch, her friends E was Frankenstein Bride and B was Ghost Rider (I think)

As per previous years, the Halloween event took place at the Lego Kingdom section, where the Lego Castle is. We were there at 5pm, just in time to witness the opening dance by the Walking Undead. The Legoland crew were dressed up in their creepiest outfit, and danced to Backstreet Boys' " Everybody (Backstreet's Back)". 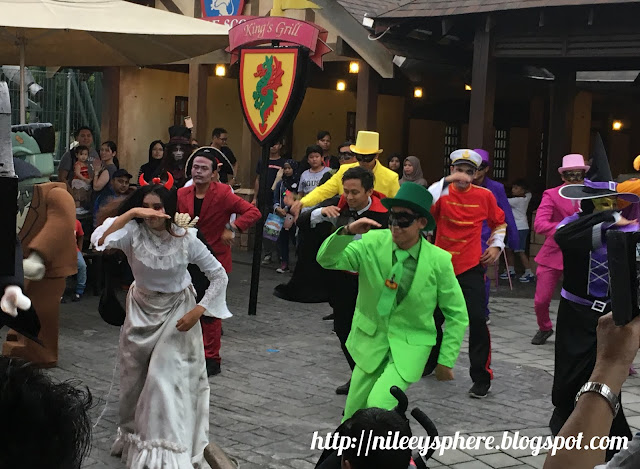 FYI - Backstreet Boys was one of the most popular boyband during my teenage years. I remembered this video on MTV, so it's no surprise they used back this song and dance moves for their performance.


After that the booths are open and all kids ran free to roam and get their goodies, or take part in activities! There were evidently very few booths this year as compared to previous years. I only saw Haribo, Petronas and Kenny Rogers booths. How disappointing! 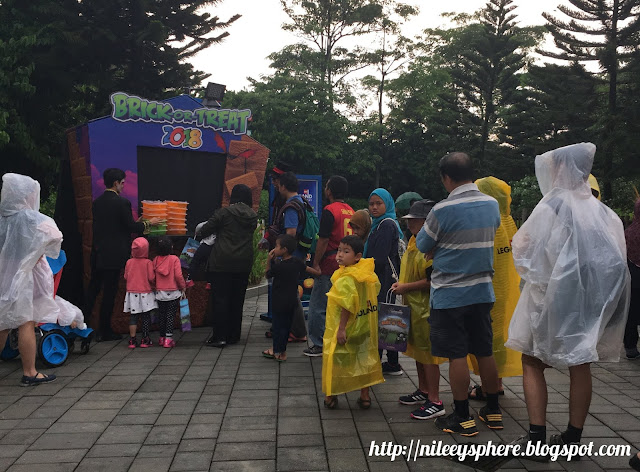 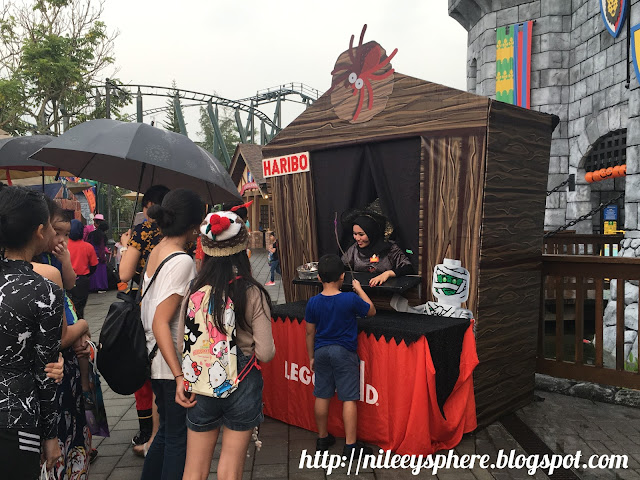 Around 5:20pm, it began to rain, at first a drizzle, followed by a heavy downpour. We took shelter at any covered areas within the vicinity and waited for the rain to stop. 10 minutes into the downpour, the organisers decided to allow guest to come up to the stage to participate in the Scream-O-Meter challenge. Each participating family was allowed to come up on stage and give their loudest and highest pitch scream onto the Scream-O-Meter. The winner with the highest score shall receive a prize. Although the kids did well, we did not stay on till the 8pm to listen out for the announcement of the winners.

Thankfully by 5:45pm the rain stopped, and the Legoland crew resumed their activities. Apart from the goodie bag booths, there was the usual cupcake decorating booth which one needs to pay to decorate a cupcake, as well as the build a Lego pumpkin booth. Those who completed building the pumpkin will receive a token. Usually this comes in form of a DUPLO commemorative brick, however I was very surprised the children received some other goodies instead such as a pirate eye patch and Halloween-themed headbands. Legoland is also cutting cost? Perhaps, sad but true 😢 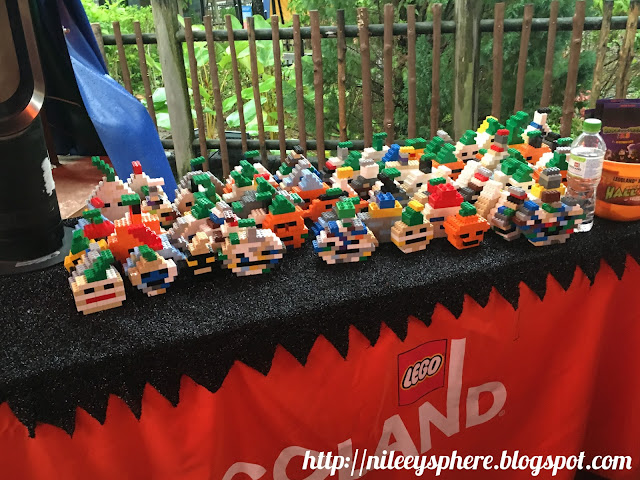 There was a long queue inside the Castle of Grim. We didn't enter as I understand it could be too scary for the children. Apparently there were characters hiding inside the castle who would jump out and scare the unsuspecting crowd, Boo! 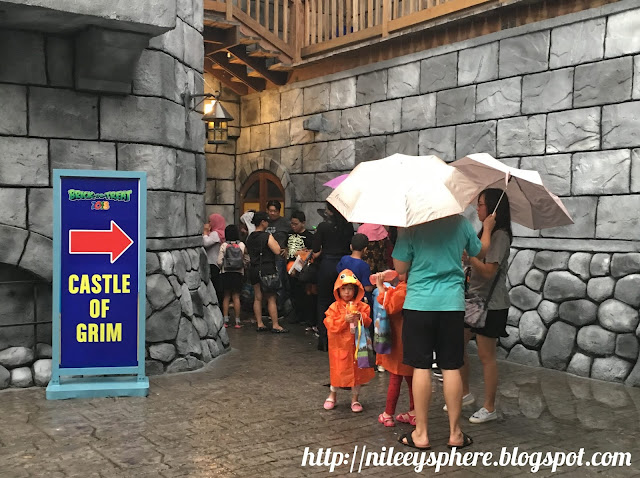 One thing different this year was the amount of crew dressed up for Halloween. The previous time we were there, there were only the Lego Frankenstein, Witch, Werewolf and Count Dracula. This year, there were more crew dressed up for photo shoot opportunities. There were the Batman Jokers, scarecrow on stilts, corpse brides, zombies, Maleficent among others. 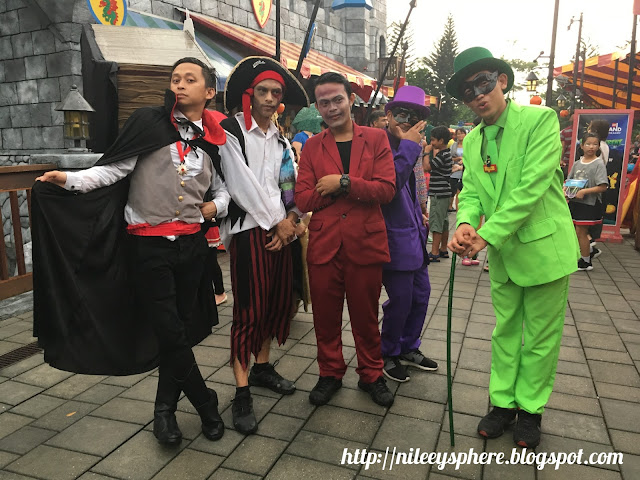 We left around 6:30pm as there was not much activities for the children, and the weather was a real damper as well. I found this year's Brick or Treat was not as exciting and grand as previous years, and the goodie bags was a little letdown, due to lack of sponsorship. Hopefully we will get better ones next year.

Before we left, I asked a Legoland crew, how come this year there is no DUPLO commemorative brick? To my surprise, without a word she took out from her basket and gave me one as souvenir. Maybe they only give those who knows of this brick? I considered myself very lucky this time. Sorry kids, only mummy gets to keep the brick this time, because it is the only one ya? 😘 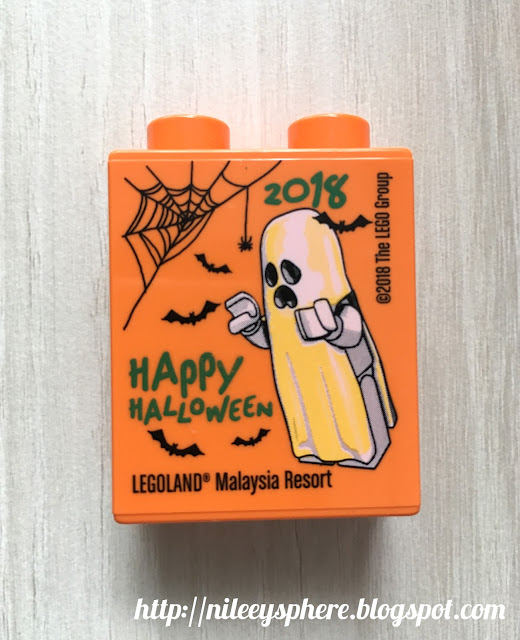